#ROTD: Ride of the Day is the new OOTD in the new normal 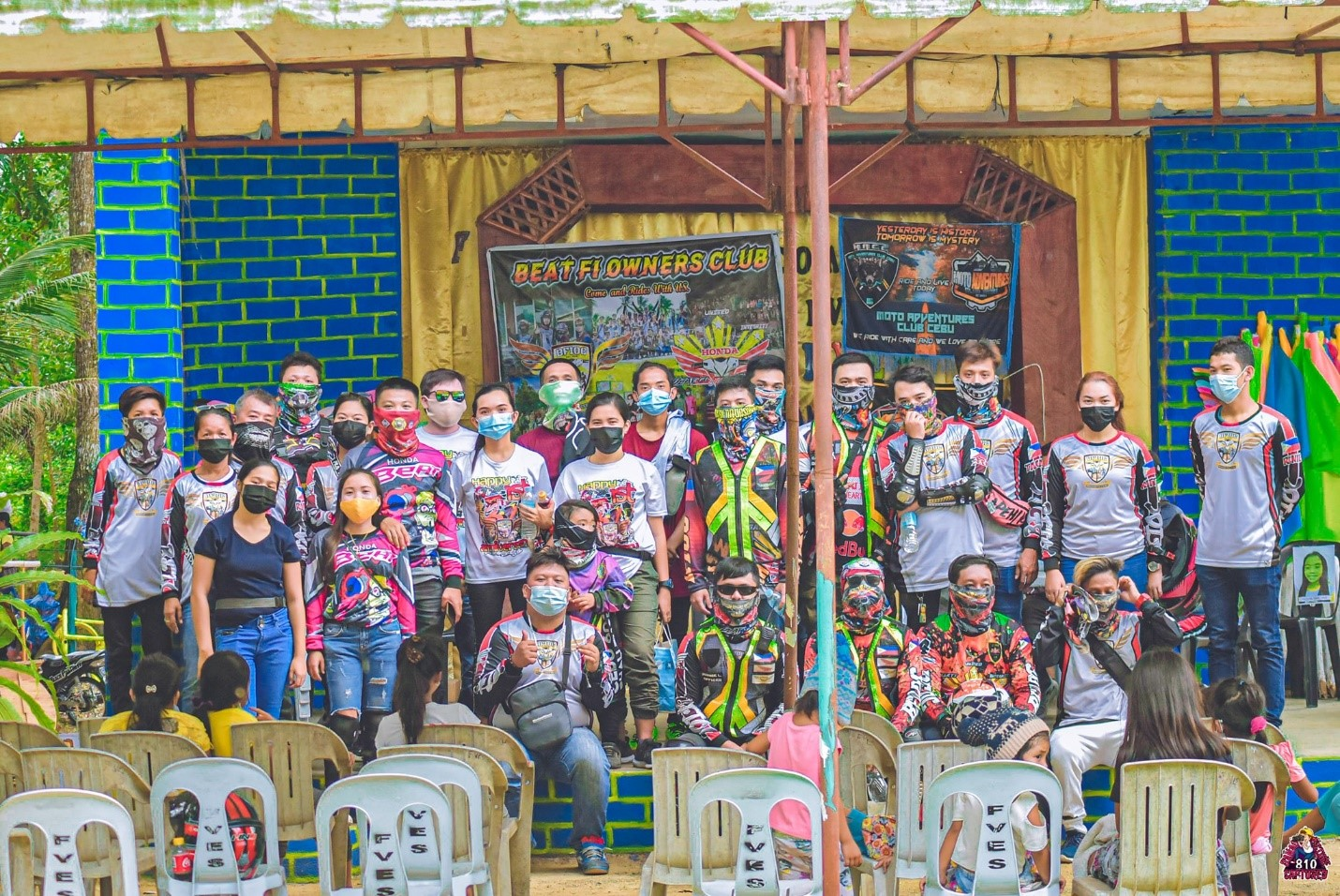 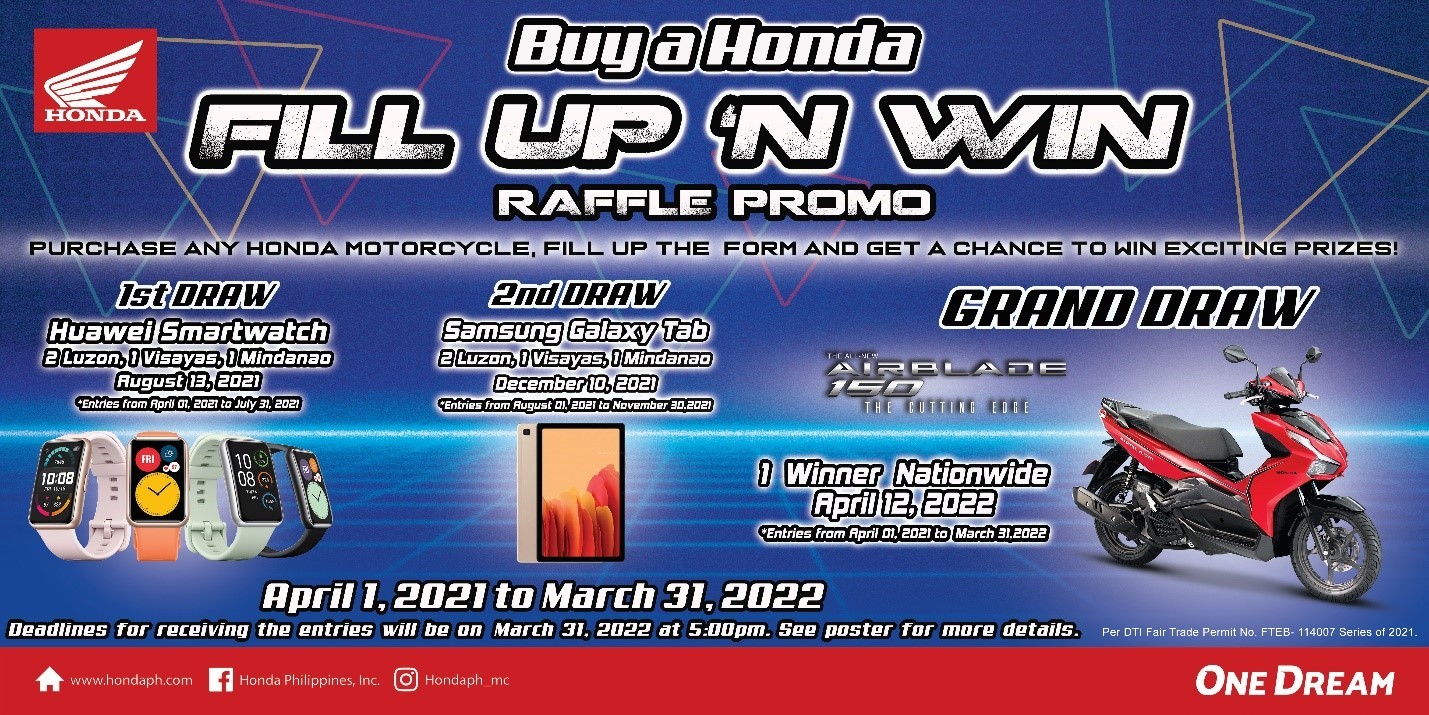 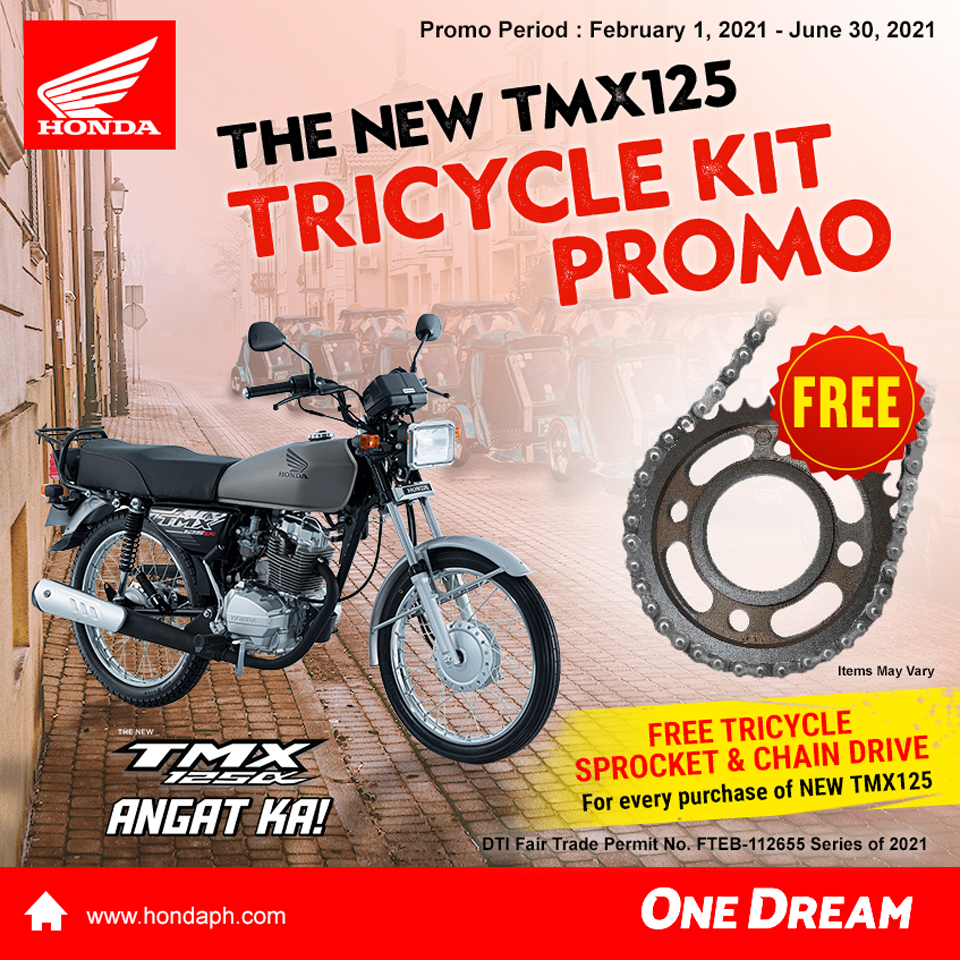 January 15, 2021 - Honda Motor Co., Ltd. announced its motorsports activities/teams for the 2021 season and initiatives to expand the popularity of motorsports.

Since the days of its founding, Honda has been strengthening its technologies, human resources and organizations and sharing the fun, joy and inspirational experiences with many fans and customers by competing in various races. In 2021, Honda will continue to compete in the most prestigious motorcycle and automobile races in the world, including plans to compete in various races in different categories in Japan and in other regions around the world. Striving to share dreams and inspirations with people as the world continues to be in the fight against COVID-19 pandemic, everyone involved in Honda motorsports activities, including riders, drivers, engineers, mechanics and other team members, will work as one “TEAM Honda” and compete with full force.

In the 2021 season, Honda will compete with the factory teams*2 operated by Honda Racing Corporation (HRC) and strive to win the championship in the Dakar Rally 2021 which is currently in progress, in the premier classes of all three categories of the World Championship

–road race, motocross and trial – as well as the FIM Superbike World Championship.

In addition to factory teams, with excellent satellite teams*3, Honda will compete in the FIM Endurance World Championship and the FIM World Championship of the AMA*4 Supercross Championship. Moreover, in Japan and many other countries and regions, teams formed by local Honda subsidiaries and dealers will participate and strive to win championship titles in the road race, motocross and trial categories.

As a new initiative starting this year, Honda will begin the Honda Superbike Challenge Program, designed to support riders who compete in road race championships around the world to further advance themselves. As a part of this program, Ryo Mizuno who competed in the JSB 1000 class of the MFJ*5 All-Japan Road Race Championship last year with MuSASHi RT HARC-PRO.Honda team, will begin competing in the British Superbike Championship this season.

In the FIA*6 Formula One World Championship (F1TM) where Honda competes as a power unit (PU) supplier, Honda won three race championships in the 2020 season. For 2021 season, Honda will continue to supply the power units with the same specifications to Scuderia Alpha Tauri and Red Bull Racing and will strive to win the world championship.

Following the footsteps of Yuki Tsunoda who will be making his F1 debut this year with Scuderia Alpha Tauri, Honda will support participation of young Japanese drivers who are striving to compete in the highest peak in the world of automobile racing in the FIA Formula3 Championship (F3) and other races.

In Japan, Honda will make changes to the team structure and strive for consecutive wins in both the GT500 class of the SUPER GT Series and the Japanese SUPER FORMULA Championship for which Honda captured the double titles last season.

As for customer racing which feature machines based on mass-market models, Honda will not only supply machines, but also extending the support for each team in order to make the race more competitive.

Civic Type-R based racing machines, Civic TCR will also be featured in the FIA World Touring Cup (WTCR) as well as TCR series and endurance races which are gaining popularity globally. Moreover, Honda will supply the NSX GT3 Evo to the GT championships and endurance races held in North America, Asia and Europe.

In North America, through Honda Performance Development (HPD), Honda will supply engines to 16 cars of 6 teams which will compete in the IndyCar® Series.

*2 Factory team: A team operated by the manufacturer of the machine

*3 Satellite team: A team that receives a machine/technological support from the manufacturer of the machine 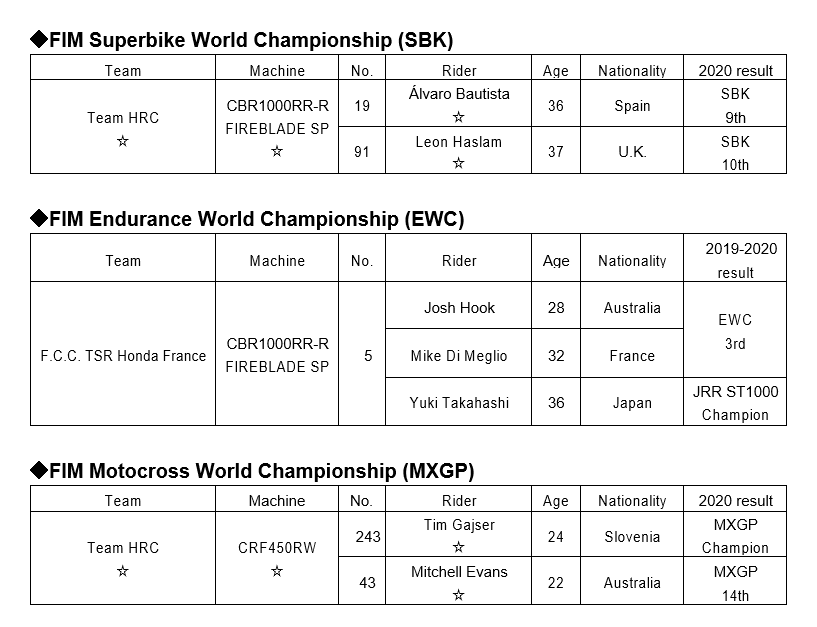 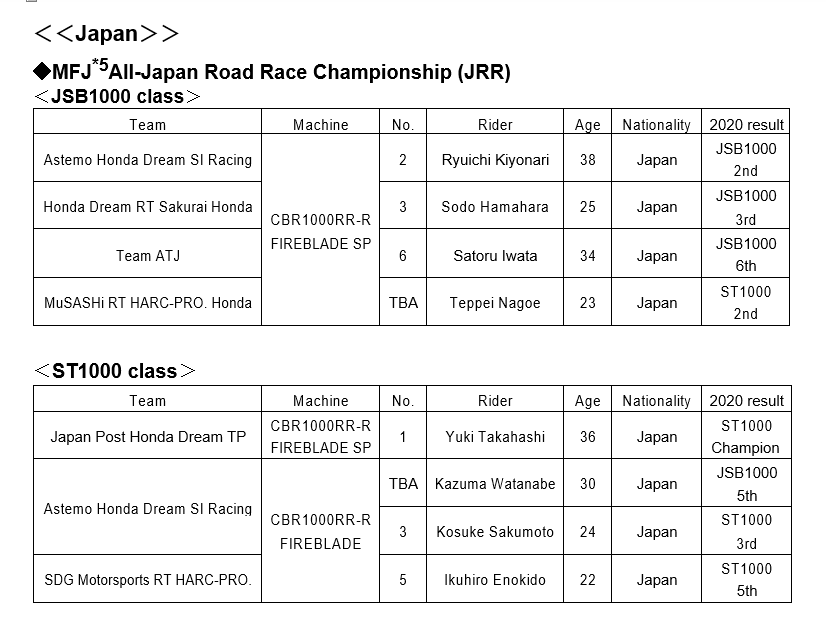 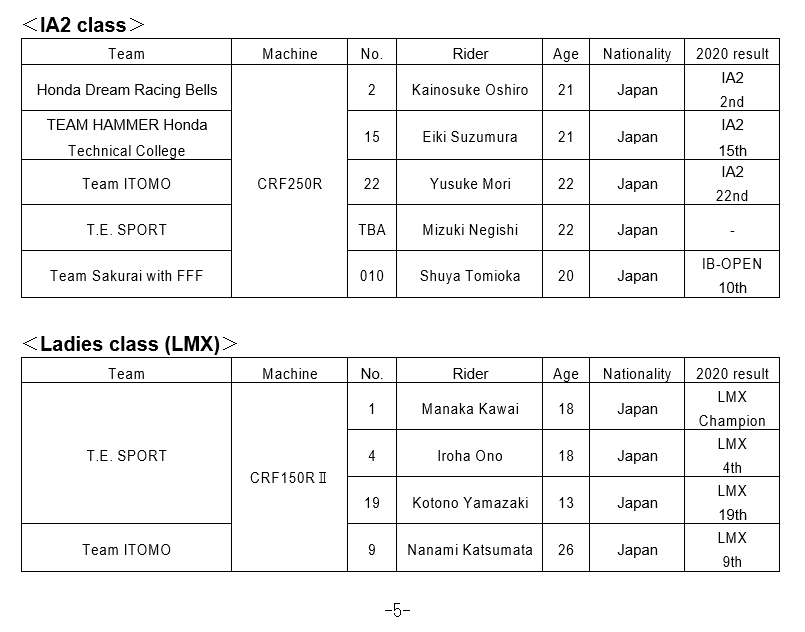 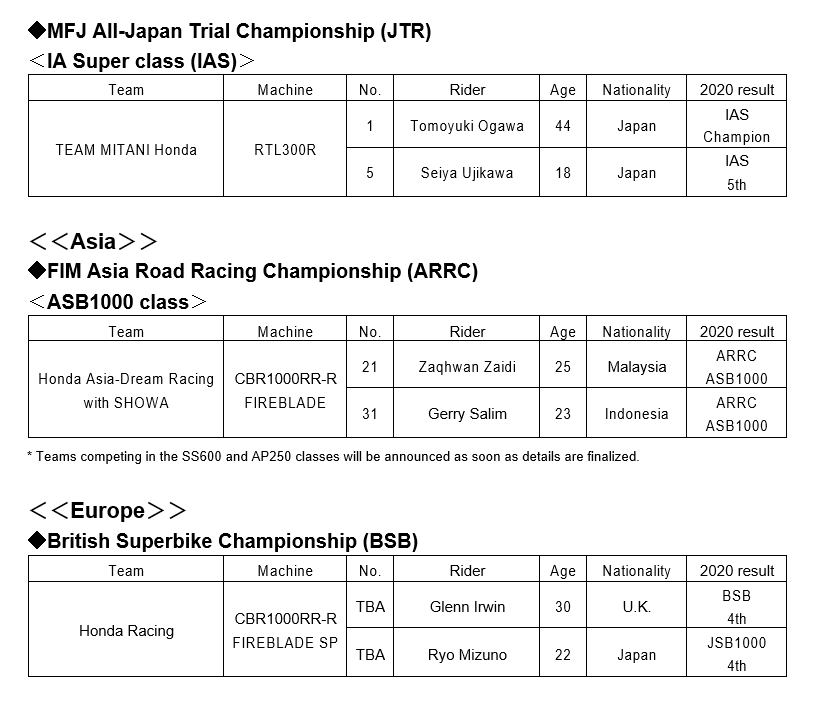 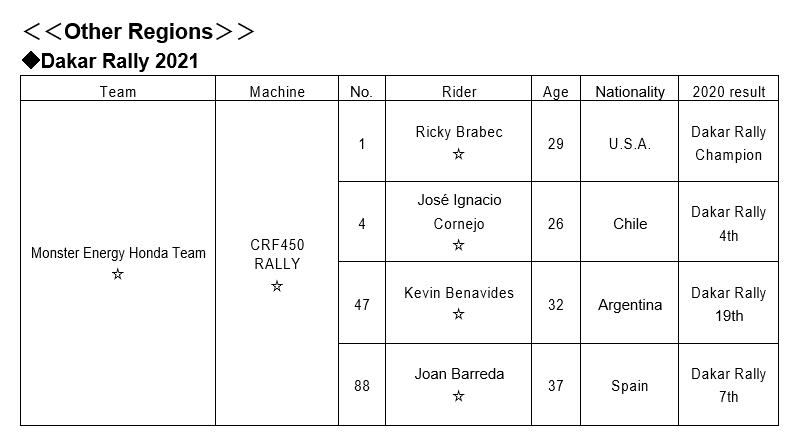 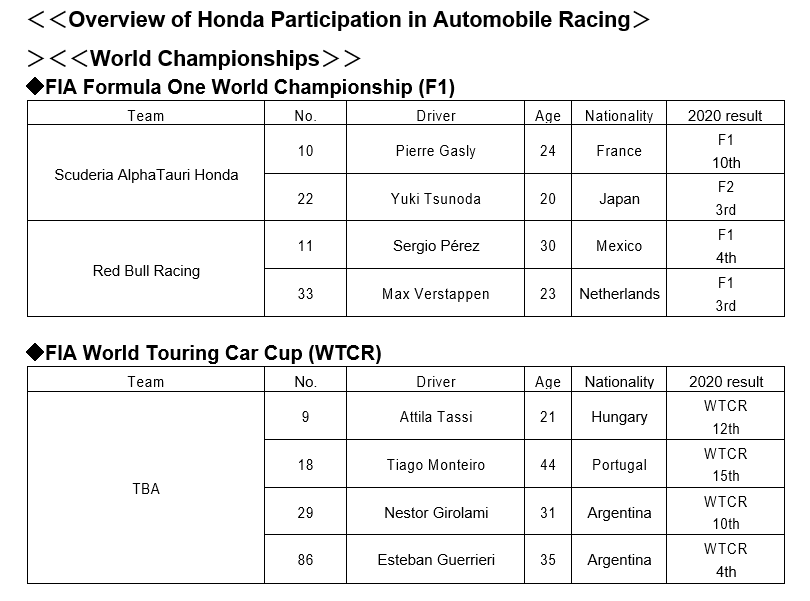 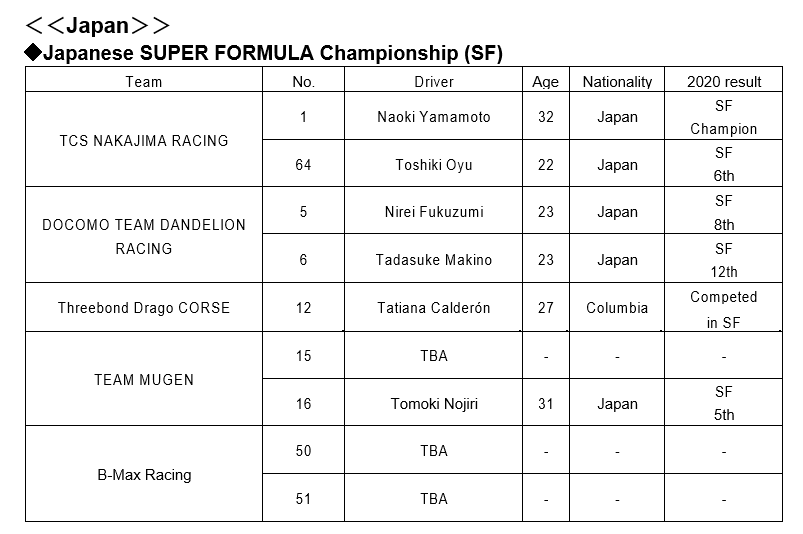 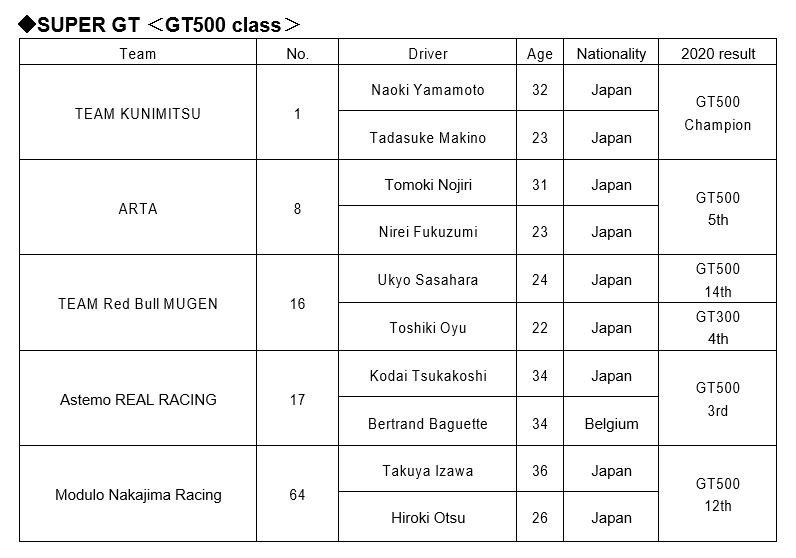 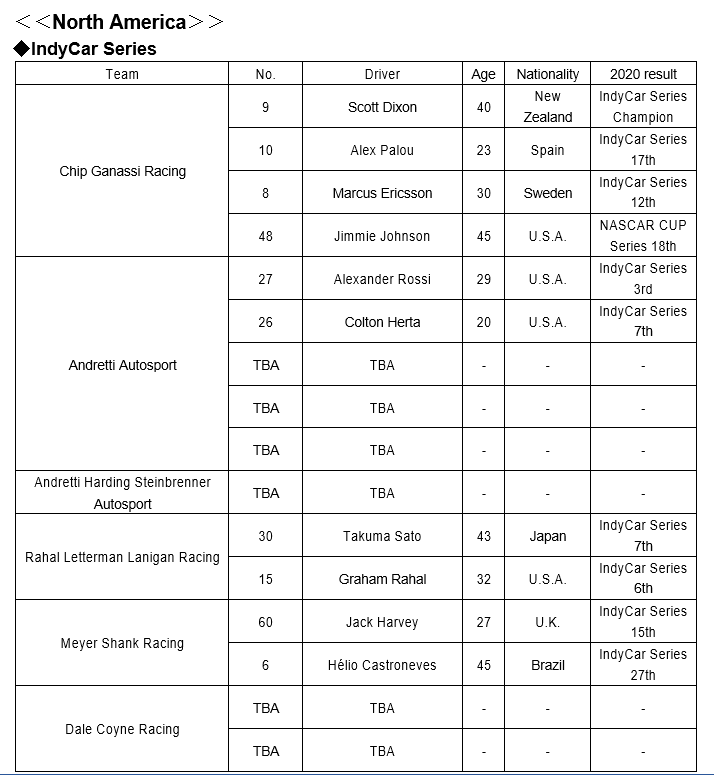 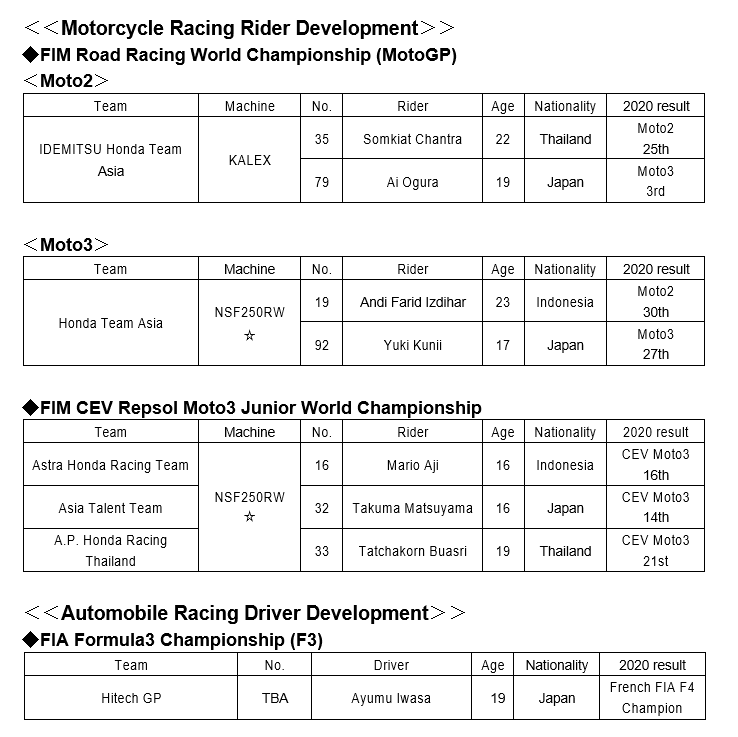 In the area of motorcycle racing, in 2016, SRS-Junior was renamed as SRS-Moto, and its rider development system and curriculum as well as the machines used in the program were renewed so that they are geared toward the development of riders who can compete at the level of world championships such as MotoGP.

In the area of automobile racing, SRS-Kart and SRS-Formula will maintain the structure established in 2019, with Takuma Sato and Shinji Nakano as Principal and Vice Principal, respectively, to further strengthen the environment to foster young drivers.

■Honda initiatives to expand the popularity of motorsports

Honda has been making active efforts to expand the popularity of motorsports. In order to convey the fascination of motorsports to a broader range of people, Honda has been conducting various events and activities including ones that can be enjoyed more casually by those people who are not yet so familiar with motorsports.

HRC is hosting various one-make races a year at approximately 30 circuits throughout Japan under two categories of races with different purposes -- to simply enjoy motorsports and to foster future MotoGP riders.

The one-make race series are being held at a number of circuits throughout Japan. In addition, HRC has been hosting some Japan-wide races (at Suzuka or Motegi) for riders who fulfill certain conditions and offering support for riders to step up through training classes. In other words, the HRC one-make race series have been a stage where participants can enjoy the races and/or strive to realize their dreams.

To show its appreciation to motorsports fans, Honda will again host Honda Racing THANKS DAY 2021 at Twin Ring Motegi. The date and program details will be posted on the website as soon as they are available.

Mobilityland Corporation strives to contribute to the further growth of a motorsports culture in Japan by hosting various events and races.

Since its opening in 1962 as the first full-scale race course in Japan, Suzuka Circuit has hosted a large number and wide variety of racing events during its rich history spanning over 50 years. The Suzuka Circuit will host a multitude of events again in 2021, including the F1 Japanese Grand Prix, where Yuki Tsunoda, the first Japanese driver competing in F1 in seven years, is expected to show a great performance. Other races to be hosted by the Suzuka Circuit in 2021 include the Suzuka 8 hours Endurance Road Race, which will be held as a part of the FIM Endurance World Championship, the Suzuka 10 hours Endurance Race, which is positioned as a global unified race of the FIA-GT3 machines.

Publicity materials relating to this press release are available at the following URL:

(The site is intended exclusively for the use of journalists.) 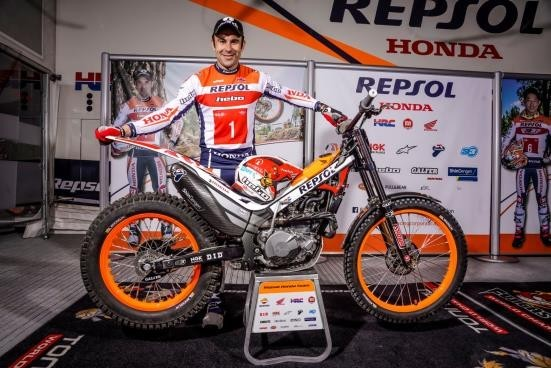 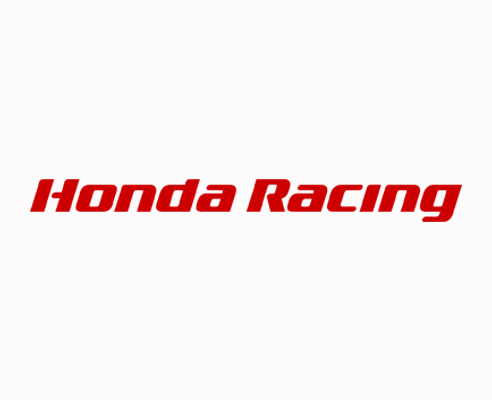